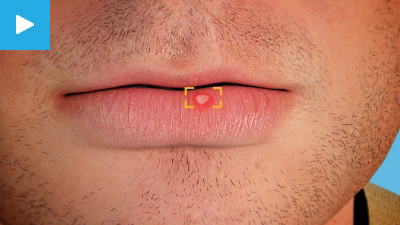 An ulcer is any breakdown of the lining of the mouth, which includes the cheeks, tongue, gums, lips and roof of the mouth. The raw area of an ulcer is often very sensitive and painful.

Some ulcers appear as single ulcers; some ulcers arrive in groups. Some heal quickly leaving no mark behind, and some heal leaving a scar that may be noticeable for some time. Some ulcers appear and then disappear never to return, others may keep coming back again and again.

A single ulcer, which is not healing and which has been present for more than 10 days should be looked at by your dentist. If there is no good reason for the ulcer not healing, it should be investigated further to exclude a possible cancer. Most ulcers however are not malignant and can be explained after the dentist has asked about different features of the ulcer.

Single ulcers that heal are often caused by some minor damage to the lining of the mouth, such as a scratch from sharp food such as potato crisps, or damage from a sharp broken tooth or filling. Alternatively, a burn from hot food could cause a blister that breaks down to leave an ulcer. Occasionally, an ulcer may arise from a chemical burn; for example, if an aspirin is left to dissolve on the gum next to a painful tooth (this will not stop the toothache). Also, the frequent and prolonged use of some toothache or teething gels can result in an ulcer in the area to which they are applied.

Other single ulcers may result from a cold sore, or much less often, a recurrence of chicken pox (shingles) affecting the mouth. More rarely, there are some conditions that can affect the mouth and cause ulceration (eg lichen planus, gluten sensitivity and other rare conditions).

The most common type of recurrent ulcers is minor recurrent oral ulceration. The name is given because the ulcers are small, about 3-5mm in diameter. These ulcers often come in groups of half-a-dozen or so. They appear in the mouth over two or three days, last about five to seven days, and then heal over the next couple of days. They most commonly affect areas towards the front of the mouth; the lips, tongue and gums, and when they heal there is no sign of where they have been.

Much less common are major recurrent oral ulcers. These ulcers tend to occur towards the back of the mouth, for example, the back and sides of the tongue, roof of the mouth and in the area of the tonsils. These ulcers are usually single and large (about 1cm in diameter), and may last for many weeks. They slowly heal and leave a scar where the ulcer used to be.

Also very uncommon are herpetiform ulcers. These ulcers are tiny (1mm in diameter) and may appear in all areas of the mouth. There are often many dozens of tiny ulcers appearing together. These will heal in a few days, do not leave a scar, and recur infrequently. The name, herpetiform, is because of the appearance of the ulcers. They do not have anything to do with the virus of a similar name that can cause cold sores.

No treatments are available which will cure the ulcers. Medications can be bought over the counter in a pharmacy that can help to lessen the discomfort, these include:

A dentist can look at ulcers about which there are worries. If the dentist feels it is appropriate, they may refer to a hospital specialist, such as a consultant in Oral Medicine, for further investigation and/or treatment.

Read More
Book Now   Back to Treatments
All patients can receive the highest Standard of care, click here to see our membership

(We are offering reduced opening hours)

Please email us at info@southfieldsdental.co.uk, use the online form below or book online. Fields in bold are required.